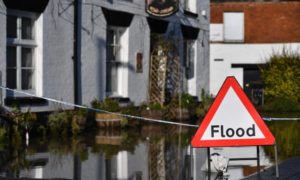 Serious flooding from swollen rivers will threaten parts of England for several days, the Environment Agency has warned as adverse weather continues to cause disruption.

The EA’s warnings came as more than 250 schools were closed across northern England on Monday because of heavy snow and rain.

Rainfall is expected to continue along the rivers Severn, Wye, Ouse and Trent, while two severe danger-to-life flood warnings were issued for Ironbridge and Shrewsbury in Shropshire, both along the Severn.

There were 105 warnings, meaning that flooding is expected, and 207 alerts meaning flooding is possible, also in force across England after a third weekend of downpours that started with Storm Ciara and continued with Storm Dennis.

In Wales, there were 14 flood warnings in force and 28 alerts. The railway line between Bridgend and Cardiff Central remained blocked on Monday after flooding, with trains also unable to tun between Aberdare and Pontypridd due to track damage to a three-mile section. No public transport was running to the mid-Wales town of Welshpool.

The Met Office warned of ice in Scotland, Northern Ireland and much of northern England on Tuesday morning.

Caroline Douglass, the director of incident management at the EA, said: “Groundwater levels across parts of Dorset, Wiltshire, Hampshire and Sussex are continuing to rise and will lead to more flooding impacts later in the week.

“We have seen our third weekend of exceptional river levels and stormy weather. With the effects of climate change, we need to prepare for more frequent periods of extreme weather like this. People need to be aware of their flood risk, sign up to flood warnings, make a flood plan and not to drive or walk through flood water.”

The wet weather was contributing to record-high river levels, and England had endured more than 141% of its average February rainfall so far, the Environment Agency said. It warned the country needed to brace itself for more frequent periods of extreme weather because of the climate crisis.

The Met Office has forecast a week of widespread showery weather, while a warning for ice covering Scotland, Northern Ireland and much of northern England remains in force until 10am on Tuesday.

The prime minister has been receiving “regular updates” about the situation, while the environment secretary, George Eustice, is “rightly” leading the government’s response, said No 10.

The head of the EA is to warn that some communities may have to move in the coming decades to avoid the growing threats posed by river or sea flooding and coastal erosion.

Sir James Bevan will tell the World Water-Tech Innovation Summit in London on Wednesday that, while banning all development on flood plains was realistic, such building should only be undertaken where “there is no real alternative”. He will say that rebuilding work following floods must improve defences against future inundations, not simply replace damaged buildings.

Across County Durham more than 150 schools, colleges, nurseries were shut on Monday because of inclement weather. In North Yorkshire, 52 schools either started late or remained shut until Tuesday, while in Cumbria 39 did not open. In Northumberland, 27 schools were closed and in Leeds, 14 schools started late to allow students and staff more time to get in.

Roads were blocked across the region as vehicles got stuck in the snow. Cumbria county council said “significantly more” snow than predicted had fallen in parts of the county but that gritting crews were out in challenging conditions to clear roads.

In Bishop Auckland, Durham police asked residents not to join a search after reports that a person may have gone into the River Wear near the Newton Cap Viaduct. “Conditions near the river are particularly hazardous and we would request people stay away from the area for their own safety,” the force tweeted.

While the extreme weather should settle down over Tuesday and Wednesday – accompanied by a notable dip in temperatures – the Met Office said further heavy rain was expected on Friday.

The bleak outlook follows more than a fortnight of downpours and flooding. Contrary to some reports, the weekend’s storms have not been named by the Met Office.