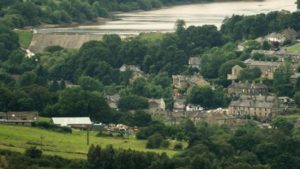 According to the BBC, as of Monday 5th July, Whaley Bridge residents are spending a fifth day out of their homes because of the partial collapse of the dam wall.

Toddbrook Reservoir is 48% full but needs to drop to 25% before the 1,500 people evacuated are allowed home.

The dam is said to be “relatively stable” after four days of efforts to bolster it.

But Derbyshire deputy chief fire officer Gavin Tomlinson said the operation would continue “for a few days yet”.

Crews using 23 high-volume pumps have removed more than a third of the reservoir’s water since part of its spillway collapsed on Thursday 31st July following heavy rainfall.

Mr Tomlinson said: “We’re now below half the level we want and we’re now aiming for about 25%.

“If the calculations are right we should be able to get below the level of the damage on the dam wall which will allow the engineers and the specialists to assess it.

“As soon as we get the water level down to a safe level, which is around 25% of the contents of the dam, then the emergency phase is over and then the contractors can look at the repairing of the dam wall.”

RAF Chinooks have dropped more than 500 tonnes of aggregate into the damaged section of the wall to reinforce it.

However, as many parts of the UK were hit with storms, Whaley Bridge escaped with only light showers.

Speaking late on Sunday, Wing Commander Coles said: “I think the assessment is now that actually the dam is relatively stable.

“It’s very much a case of pumping more water out, and those engineers when it comes first light, will make another assessment of how successful that’s been.

“The military will stand by ready to come back up if required but I think the sense of the moment is very much we’ve got through the worst of it.

“We were fortunate with the weather.”

Police, the Environment Agency and the Canal and River Trust, which owns the dam, have all said there is still a “real risk” the 188-year-old structure may collapse and flood the town.

The trust said it carried out an annual inspection of the dam in November and it was “absolutely fine”.

Meanwhile, 22 residents from 16 households have refused to leave their homes, prompting sharp criticism from police.

That number is down from 31 people in 22 homes, reported by police on Sunday.

Deputy Chief Constable Rachel Swann said: “We’ve not evacuated this for no reason.

“We’ve evacuated this because there is a real prospect that the dam could fail, and if it fails it is catastrophic.

“People would die if they were in that evacuation zone. So those people who remain in that zone are putting their lives at risk.

“They are also putting the lives of the responders, primarily the police, at risk because we have to keep going in and speaking to them and asking them to leave.”

Ms Swann added that the emergency operation was “ahead of schedule” and she was hopeful engineers would be able to assess the dam integrity later so they could potentially begin making plans to allow residents back home.

On Sunday, police said if the dam held then the “worst case scenario” would be that the evacuation zone would remain in place for a week.

The situation at Whaley Bridge has continued to disrupt train services, with East Midlands Trains reporting delays on a number of routes.

Monday’s forecast for the area is for largely dry weather, with the odd light shower.