Two men, originally from West Norfolk, have been dubbed the Iron Men of Downham after completing a gruelling challenge.

Laurence and Ciaran O’Grady took on the Half Iron Man and raised more than £5,700 for the Magpie Centre, home of West Norfolk Riding for the Disabled Association, for which their mother Rosie O’Grady is chairwoman.

The brothers, who grew up in West Dereham and attended Downham High School, chose to complete the Half Iron Man, as they say a standard triathlon “wasn’t scary enough”.

The pair took part in their challenge at Cholmondeley Castle in Cheshire, and last June they turned up with high hopes and “not nearly enough training”, according to Ciaran.

The brothers, who now live in London, run their own fire and flood restoration business called Tempest.

He said: “It was really hard to fit in the training time, as we work long hours in the business, plus I have two children under five.”

The sponsorship total was gathered by drumming up support from family, friends and business clients.

Ciaran said: “We said that for every £1 donated, we’d match it with 50p from Tempest, and that proved a really good incentive.”

The money will help buy a horsebox for the Magpie Centre, so they can transport horses and ponies. 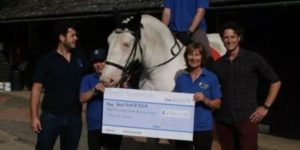