A clean-up operation is under way in Sion Mills after what was described as the “worst flooding” in the County Tyrone village for years.

According to the BBC a number of residents were evacuated and several homes damaged due to the heavy rain on Sunday night.

Sixty firefighters responded to 30 flood-related calls which were made at around 18:00 BST.

More than 100 calls were made to the Department for Infrastructure (DfI) flooding helpline.

There was also flooding at Nutfield Road, Lisnaskea, in County Fermanagh.

Sion Mills resident Justin Walker said he was alerted to the flood waters in his garden while watching TV at home on Sunday night.

“A lot of it was streaming down from the mountain lanes and coming right through the back of our property. It was about an inch away from our back door and just seemed to be getting higher and higher.”

He added: “At that point we phoned the agencies for sandbags. All the neighbours were out helping. We managed to sandbag where we could and divert the flow of water away.” 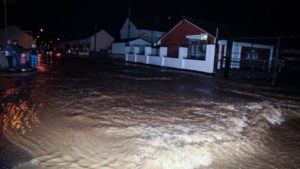 He said there were eight to 10 inches of water places with some deeper localised patches.

Mr Black added that there would be a multi-agency effort to assist residents affected by the flooding although there was not yet any indication of the damage caused.

John Conway who lives in Parkside Gardens said he had “never seen anything like it” in 30 years of living in the village.

“There was a lot of water coming down, it was running just like a river. It ran down fairly heavy. It just happened so fast, it was unbelievable.

“It came into the hall, but we were able to clear up with towels, and mop it. We had a lucky escape.” 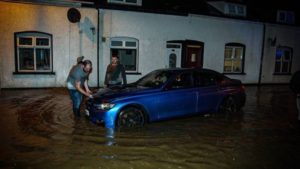 Peter McFarland of the Department for Infrastructure (DfI) said more than 100 calls were made to the DfI flooding helpline and over 1000 sandbags distributed in the County Tyrone village.

He described the flooding as “quite severe” and said dept. staff worked into the night to combat the intensity of the rainwater.

Officials were assessing the damage to homes on Monday morning.

“This flooding has been extremely distressing for local residents and every effort must be made to support them and to ensure it does not happen again,” she added.

SDLP councillor Cara Hunter, who said it was the worst flooding for years, added: “This is an ongoing problem.”

Meanwhile, a Weather Warning has been issued by the Met Office for 24th – 25th September, covering much of England.

Widespread rain is expected on Tuesday with some very heavy rain possible, bringing some disruption from flooding.

Homes and businesses could be flooded, causing damage to some buildings.

Fast flowing or deep floodwater is possible, causing a danger to life and some communities may be cut off by flooded roads

Delays or cancellations to train and bus services are possible

Spray and flooding could lead to difficult driving conditions and some road closures – Possible power cuts and loss of other services to some homes and businesses.