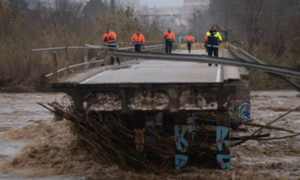 Police inspect a bridge brought down by Storm Gloria, in Malgrat de Mar, near Girona.

The storm, which had left 220,000 people in the Tarragona region without electricity on Tuesday, began to shift away on Wednesday, but some north-eastern and Balearic areas remained on orange alert.

A man died of hypothermia in Carcaixent, Valencia on Wednesday, while a woman was killed in Alicante province when her home collapsed. A farmer in Almería died after becoming trapped in a greenhouse during a hailstorm and another man was found dead in a flooded area a few miles inland from Benidorm.

Gloria had claimed five other lives between Sunday and Tuesday with winds of up to 90 mph (144kmh) and waves up to 13.5 metres (44 feet) high. 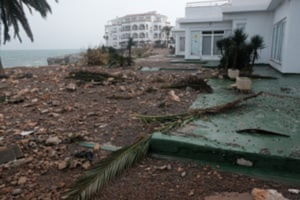 One man was run over as he put snow chains on his car tyres in Asturias on Sunday, while another man died after being hit by a roof tile in Ávila the same day. Three other people are thought to have died of hypothermia in Valencia on Monday and Tuesday.

Rescuers are still searching for four missing people, among them a 25-year-old Briton who disappeared while riding his motorbike in northern Ibiza.

A spokesman for the emergency services said police were alerted by his colleague who had gone to search for him after the Briton – who was on a day off – failed to return from the trip. The colleague could only find his bike, the spokesman added.

Dani Palacios, the head of beach services for Barcelona in the north-east, told the local broadcaster Betevé that Gloria was the worst sea storm since 2003 and probably this century. 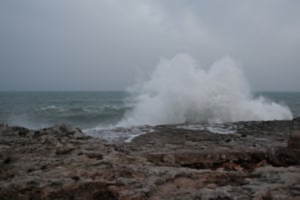 The wild weather also brought seawater pouring into the Ebro delta, one of Spain’s most important wetlands, inundating thousands of hectares of rice plants.

“We can’t remember anything similar ever happening,” the local mayor, Lluis Soler, told Cadena SER radio. “It’s dramatic to see how the river has overflowed and the sea has travelled kilometres inland.”

Spain’s prime minister, Pedro Sánchez, offered his support and condolences to the families of those killed “and to those who are suffering the fatal consequences of this stormy weather”. He also thanked the country’s emergency services for their efforts.