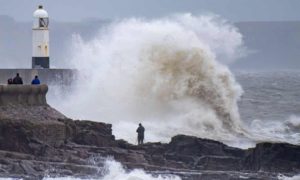 High winds have added to widespread flooding as Storm Bella continued to wreak havoc across much of the UK. In many coastal areas, communities were forced to erect flood defences to counter the impact of waves whipped up by gusts that reached 100mph overnight.

People in the north-west awoke to snow and showers on Sunday, while the Met Office issued 112 flood warnings across a swath of land from Cornwall to Kent.

Two of the warnings were severe – at the Cogenhoe Mill caravan site near Northampton, and on the banks of the River Nene near Billing Aquadrome – after days of wintry weather during the Christmas break, while an imminent cold snap with icy and wintry conditions was forecast.

The highest wind speed was recorded at the Needles on the Isle of Wight, reaching 106mph overnight on Saturday. Gusts of 83mph were recorded at the coastal village of Aberdaron in north Wales, and regions on the south coast of England, including Dorset, got close to 80mph. 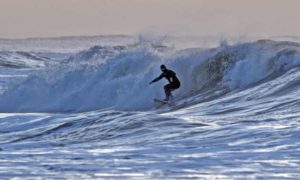 Hundreds in the Plymouth and Truro were left without power as electricity lines collapsed. Similar power losses were recorded in Cardiff, Swansea, Telford in Shropshire, and Nottingham.

The Met Office warned of the risks posed by flying debris and the damage caused to exposed buildings.

The Newquay police response team in Cornwall said Storm Bella was so severe it was “throwing trees over the roads”.

The North Yorkshire fire and rescue service said they used a boat to rescue two men and two dogs from a vehicle stuck in floodwater in Hawes at 12.37am on Sunday.

In Aysgarth, a man and a woman were also rescued by boat from the roof of their car at 2.40am after they drove into deep floodwater.

Firefighters walked a woman to safety through shallow water in Wensley at 3.35am after a minor collision while driving through floods.

In Hove, Sussex, a tree fell on to a £363,000 Rolls-Royce. Tree surgeons were called in to saw up the branches and lift them off the shattered vehicle with a hoist.

Some people managed to find new ways to enjoy themselves even at the height of the storm, including kayakers who took to new waters around the UK – among them Worcester racecourse and the flooded A1101 at Welney, Norfolk.

The disruption continued into Sunday morning when flooding on the tracks caused cancellations.

All trains between Bournemouth and Southampton Central were stopped due to the storm, Great Western Railway said, and one of the major lines into London was also blocked when a tree fell on the tracks in Haslemere, Surrey.

About 25mm of rain is due to fall on Sunday in parts of the south-west England and Wales, with up to 60mm on high ground.

Flood defences have been put in St Neots, Cambridgeshire, and extra pumps deployed to the Welches Dam and Soham Lodge areas. 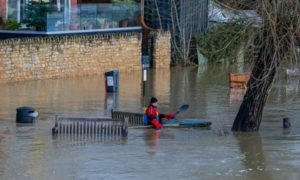 In its early stages the storm forced people living next to the River Great Ouse in Bedfordshire to flee their homes on Christmas Day, as floodwater rose to dangerous levels.

On Sunday the Coral Welsh Grand National meeting at Chepstow was abandoned after 27mm of rain fell overnight.