People urged to brace for floods, gales and snow, with parts of England expecting 200mm downpours 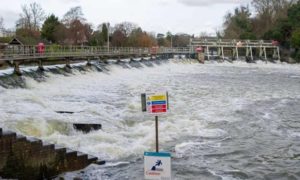 A major incident has been declared in South Yorkshire as Storm Christoph is set to bring widespread flooding, snow and gales to parts of the UK.

People have been urged to prepare after an amber weather warning for rain was issued by the Met Office for Tuesday to Thursday for central northern England, affecting an area around Manchester, Leeds and Sheffield and stretching down to Peterborough.

It has led to a major incident being declared in South Yorkshire in preparation for potential flooding, said Ros Jones, mayor of Doncaster.

Jones said emergency protocols were instigated with sandbags handed out in flood-risk areas. She said plans would run alongside the region’s Covid-19 response, adding: “I do not want people to panic, but flooding is possible so please be prepared.”

The Environment Agency described the combination of torrential rain and melting snow as a “volatile situation”, with councils preparing for possible evacuations should a severe flood warning be issued.