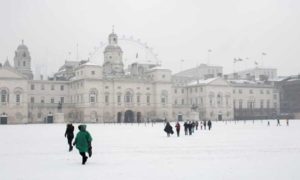 Snow is likely to fall across many parts of northern England on Thursday, with the possibility of a Beast from the East 2 in the middle of next week.

The Met Office said freezing rain could turn to snow in parts of Scotland and north-east England from Wednesday night into Thursday morning.

Through Thursday itself there’ll be further rain across the bulk of the UK and this could bring some fairly significant snow a bit further southwards through Thursday.

By Thursday afternoon we could be looking at snow across many parts of northern England and into the Midlands and perhaps a little bit further east as well.

For northern England we could be looking at around 15cm, perhaps 20cm, by the end of Thursday over the highest routes.

He said there could be one or two centimetres of snow over the highest routes in central and eastern parts of England.

It is possible temperatures will plunge further next week, and there is very much a possibility of a Beast from the East 2 in the middle of next week.

The first Beast from the East, the name given to the significant snowfall in February 2018, happened when a sudden stratospheric warming event sent freezing winds from Siberia.