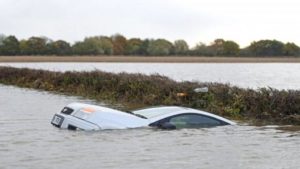 More heavy rain is expected in parts of Yorkshire and the Midlands already suffering from flooding.

The Environment Agency has 44 flood warnings in place across the country, including five severe warnings on the River Don in South Yorkshire.

About 400 homes have been flooded in the North, and 1,200 properties have been evacuated, said the agency.

Residents of Fishlake, near Doncaster, said it was the first time the village had flooded in 100 years.

A yellow warning for rain remains in place over parts of Yorkshire and the East Midlands on Monday 11th November.

Empty coffins were seen floating inside the workshop of a flooded funeral parlour in the village.

Some villagers had to spend the night at a nearby pub, where staff said they had seen people crying because of the devastation.

Resident Pam Webb said: “At around 17:00 on Friday we were told there was no need for sandbags, houses would not flood.

“By 21:00, possibly a little bit before, houses were starting to flood and then it continued at an extremely rapid rate.”

Ms Webb, who owns a spa in Fishlake, said she bought her property in 2004 and had surveys done at the time.

“There was nothing of any concern raised – Fishlake hadn’t flooded and hasn’t flooded in 100 years.

“I had no concerns whatsoever with going ahead with the business and nobody else in this village would have.” 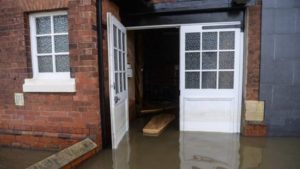 The village church is collecting food to distribute to residents and roast dinners were delivered on Sunday 10th November to those who had remained in their homes.

Tractors and boats have been used to get around the village, with many roads in the area under flood water.

Military helicopters have also been used to help aid defences in the Doncaster area.

Farmer Robert Robinson said: “My whole farm is just covered in water. We’ve animals that are suffering because of the water and we can’t get in and out without tractors.

“We desperately need the River Don to be dredged and cleaned out – it’s there to transport water and it’s not doing its job properly.” 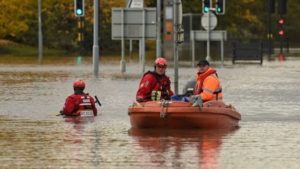 Adrian Gill, a flood manager with the Environment Agency, said: “One of the biggest challenges we always have in an incident is giving people accurate, timely and clear information about what’s

happening in what can be quite a difficult and changing situation.

“We tried to keep people as informed as we can.”

He said the Environment Agency did not currently dredge the River Don “because we don’t think that’s the right thing to do” but the situation could be reviewed in the future. 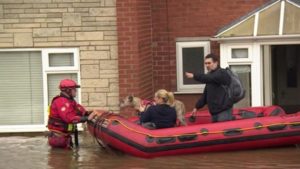 According to the Salvation Army, some people have been rescued from their homes by boat since the early hours of Saturday, but others remain in their properties.

Damian Allen, Doncaster Council’s chief executive, said: “We are concerned over reports that some residents remain in the Fishlake area.

“South Yorkshire Fire and Rescue crews are on hand to evacuate any Fishlake residents who may be stuck in their homes, and we would urge everybody to take advantage of this.

“The council are unable to offer on-the-ground support to residents who are in severe flood warning areas, based on advice from the Environment Agency.”

The council said it would be at least 48 hours before people could return to their homes.

Police have moved to reassure residents that rumours of “criminality affecting the evacuated properties” are false and they are not aware of any incidents.

One woman said she had no insurance to cover the cost of damage to her home in Bentley, near Doncaster, after it flooded over the weekend.

April Wingfield, who had to be rescued from her home by boat, said: “I’m devastated, I’m just going to have to start from scratch.”

She said the situation was worse than in 2007, when 2,200 properties were flooded across Sheffield with damage estimated at £400m in the Lower Don Valley alone.

Mrs Wingfield did not have insurance in 2007 and said it had become too expensive afterwards.

Further south, parts of Derbyshire are still affected by flooding.

Areas around Matlock – where former High Sherriff of Derbyshire Annie Hall was sadly swept to her death by the flooded River Derwent – are continuing their clean-up efforts, with further rain over the weekend leaving standing water along a number of roads.